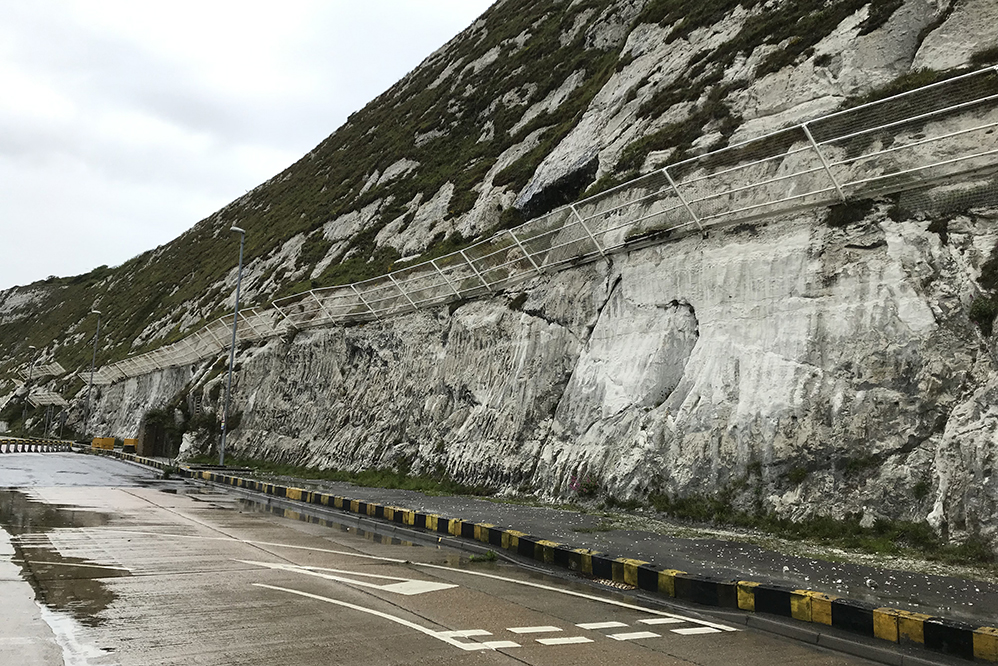 CAN Awarded Rockfall Catch Fence Installation at the Port of Dover

CAN Geotechnical Ltd has been awarded the contract to install rockfall catch fences within the Port of Dover in Kent, a project commissioned by Dover Harbour Board.

Specifically, CAN will remove over 220 linear metres of existing life-expired catch fence from the lower Eastern Docks cliff and install a new a Geobrugg GBE500A 500kJ impact energy-rated catch fence, designed by JUBB Consulting Engineers. Posts for the new fence will be secured to anchorages drilled and grouted into the chalk rock face.  The 250 linear metre new 5m-height catch fencing will be secured to these posts and anchors.

With safety paramount, scaling of the upper cliff will be undertaken utilising CAN Geotechnical’s rope access team to make the lower worksite safe, with the remainder of the work being undertaken using Mobile Elevating Work Platforms (MEWPs) from the Port below, to ensure safe access.

“With the cliff face and surrounding land designated a Site of Special Scientific Interest (SSSI), as well as a Special Area of Conservation (SAC) all work has to be planned carefully to protect these environmentally and ecologically sensitive areas. In particular, there is a rare chalk grassland environment containing species such as the Adonis Blue butterfly and the nationally rare Early Spider Orchid and it is important that our work has absolutely zero impact on the areas recognised features.”

The award of the contract follows on-going annual inspections of the chalk cliffs above the Port.  These inspections were undertaken as part of the Port’s holistic asset management strategy, which will assist the Port to identify any areas for potential instability and rockfall from the existing rockface.

CAN to install rockfall catch fence at Port of Dover